The calla lily, or Zantedeschia, makes an impressive display in the garden. Since it doesn’t mind having wet feet, this flower is a great choice to add as a marginal plant to your pond or waterfall. You’ll love the architectural appeal of both its leaves and flowers. 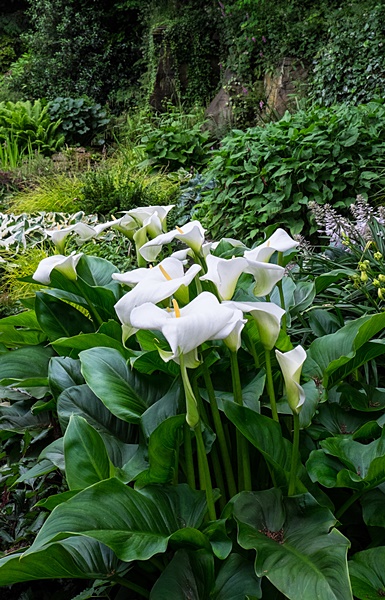 Despite its name, the calla lily isn’t truly a lily. It’s a cousin to philodendrons, caladiums, and peace lilies, among others. The name calla means “beautiful” in Greek and while we think of the white trumpet as the beautiful flower, the flower is actually the upright spike in the middle. The white or colored portion of the flower is a modified leaf.

Plant the calla lily in an aquatic planter and place it at the edge of your pond or stream to a depth where the water does not cover the crown of the plant. In the summer, your calla lily will enjoy wet soil and full sun to partial shade. Since it’s considered an annual, it’s best to bring it indoors before the first frost (unless you live in Zone 8 or 9). Keep the calla lily indoors where it receives bright, indirect light.  The following summer, you can re-pot the lily in an aquatic planter and place it back in your pond.

Calla lilies are fairly easy to grow and you’ll enjoy its beautiful blooms from late spring through summer. Calla lilies make great cut flowers so you can snip them and bring them inside to enjoy. Keep in mind that all parts of the calla lily are poisonous, so you’ll want to keep them away from your pets and children. In the pond, be sure not to submerse them to a point where your fish could nibble on them.