Who doesn’t love koi in their pond? They’re beautiful and friendly, providing glimmers of color as they weave their way beneath the lily pads. Certainly they deserve their rightful place in a tranquil water garden. But what about other options? An array of pond fish is just waiting to call your pond their home.

Goldfish are perfect for your pond … resilient and able to handle all different kinds of water. For the newbie pond owner, goldfish are a great choice for getting started with fish-keeping. Several varieties of goldfish are available, from comets (plain orange and white) to the exotics like ranchus and bubble-eyes.

Included in this showy category are lionheads, telescopes, black moors, orandas, ranchus, and ryukins. The single most distinguishing characteristic of this group as a whole, are their round, bulbous abdomens.

With this exotic group, extra caution should be taken if they are going to be placed outdoors, especially over the winter. Because they’re not as hardy as some of the other goldfish, they may become ill if left outdoors in the winter. This is especially true of the adults of these varieties.

The reason for this overwintering weakness is thought to be related to the compacted, contorted abdomen of these fish. Their abdomens serve as a delicate balancing act of downward ballast, intestine, and fat versus the buoyant structure of the airbladder. The hardship of winter almost always degrades this equilibrium, resulting in the fish flipping over and eventually dying. This is easy to overcome by bringing these finned friends indoors to join you just in time for the holidays!

The shubunkins is a type of single-tailed, long-bodied goldfish that originated in China. There are two different types of shubunkins. One has a long tail fin, with broad tail fin lobes that are rounded on the end. The other one looks more like a common goldfish, with a short tail fin. Bred mainly for their coloring, shubunkins often have a red, black, and sky blue coloring … sort of like a calico.

The most valuable of the shubunkins are mostly blue with strong accents of white and red, and the overall pattern sparingly flecked with black. In fact, when blessed with a white, black, and orange pattern, some may resemble baby koi but are far from it. They are different in size and markings. Most notably, they lack barbells (whiskers of sorts) that are found on koi. Shubunkins are hardy fish that can survive sweltering summers and severe winters, and can grow up to 14 inches in a minimum 180-gallon pond.

Sarassas are very similar to shubunkins in that they both have a similar body shape, however, they do not quite reach the same size as their larger shubunkins counterparts. The sarassa features a white base color and brilliant red highlights. It is believed that they came from a cross between the red cap oranda and the comet goldfish, and are sometimes referred to as the poor man’s koi.

Amazingly, the brilliant red of the true sarassa is a lifelong proposition and the fish are very enjoyable. Uncontrolled breeding of the sarassa will yield more and more brown fish until the pond population has returned to unselected comet and brown goldfish ancestry.

There are also some fish, which you may have never heard of, that would make great pond fish. Orfes, for example, call many a backyard pond home. In its native habitat, the Danube River, the golden orfe is a dark silvery color, but received its golden color when bred in Europe. The bright orange color is very attractive, especially since they characteristically swim near the surface of most ponds with the rest of their group. This is helpful because their presence near the top of the pond can also encourage koi and other goldfish to visit the surface of the water as well.

One thing to keep in mind is that golden orfe grow extremely fast. A 2 to 3-inch golden orfe can quickly reach sizes of 2 to 2 ½ feet! While golden orfe feed mostly on insect larvae, worms, and fallen insects, they are derived from the predatory side (in its original silver color) and could pose a risk to the rest of the aquatic life, although it is unlikely. Orfe are highly sensitive to fish medications of most kinds, and extreme care must be taken.

Catfish are another popular fish seen in the water garden. They are commonly sold as scavengers to help clean up the pond, but they really don’t do that much of it. Caution should be taken with these fish because they can become quite large in a short period of time. When they become large, they can cause trouble because they may start eating whatever they can fit in their mouth … including other fish!

Getting to know the background of the pond fish you plan to keep as pets is vital to their survival and your sanity. By knowing their defining characteristics, you will have a thorough understanding of how the fish will interact in your pond with other fish, plants, and aquatic life.

Other Fish to Consider: 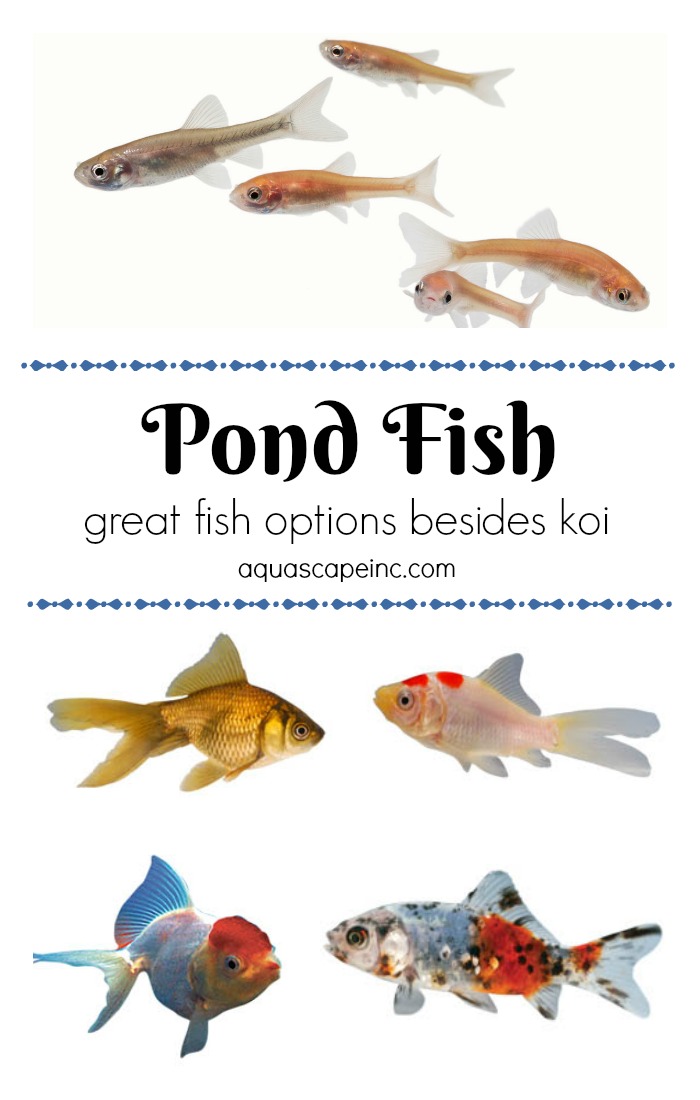