Butterfly koi are beautiful, elegant fish – but did you know that quite a few koi connoisseurs think of them as mutts?  Some go so far as to say they’re not even koi. Let’s take a look at how butterfly koi originated so you can decide for yourself if you think these long-finned creatures are worthy of your pond.

In the early 80s, a population of common, brown and gray carp with long fins were found in a series of canals and ditches in Indonesia. A company in New York took an interest and brought the fish into the United States and sold a few. They did not sell well because most fish lovers thought they were ugly. However, an enterprising and curious group of breeders at Blue Ridge Fish Hatchery placed an order for a dozen of these fish to see what exactly they were. Ugly, with long fins, is what they discovered.

Rather than call it quits on these new-found fish, the breeders decided to breed them with their finest, regular-fin koi and made several discoveries.

Wyatt LeFever was the original breeder at Blue Ridge Fish Hatchery who spearheaded the cultivation of long-fin koi. One day out of curiosity, his son Randy visited the tanks to see the fish. “Dad,” he exclaimed, “they look like butterflies!” And the name stuck. 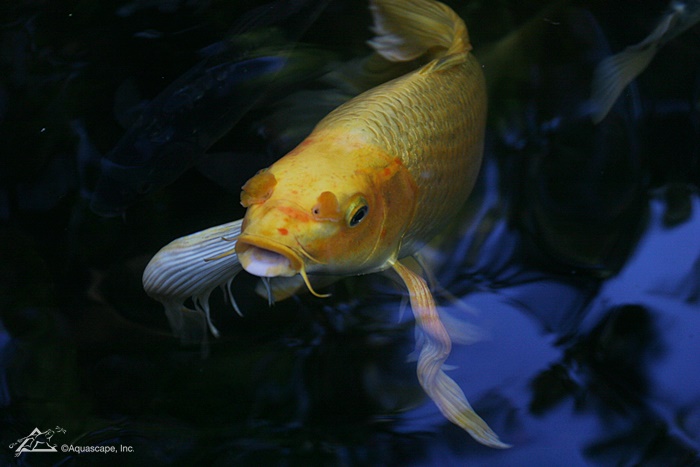 Size and Value of Butterfly Koi

As butterfly koi grow, they become more impressive because the fins keep growing until the blood vessels can no longer sustain further growth. The older the fish, the longer and more impressive the finnage. So, a full-grown butterfly koi looks like a long, slinky dragon moving through the water. Their barbels (whiskers) even grow long and can fork into elaborate designs.

Butterfly koi seem to lack some of the body size of regular koi, but the overall fish can run as long as 36 to 40 inches in the right pond with plenty of food. Over the years, butterfly fish will become broad, healthy fish with great personalities, given proper care. They are graceful and pleasant to view in the pond.

Since pattern means a great deal to the value of a regular koi, it makes logical sense that a good, standard pattern with bright colors would increase the value of a butterfly koi, too. But there are a few noticeable elements – such as fins. While a butterfly koi is more valuable when it has a properly defined and positioned pattern in the color, beautiful fins can often make even a poorly patterned fish look beautiful.

In addition, lemon and platinum ogons (solid color) in the butterfly category are amazing when they reach adulthood. When you grow a metallic yellow or platinum ogon butterfly koi to an impressive, large size, their body movement is more graceful and slow. The fins are long, but the uniform gold or neon-white color is brilliant in the water and such fish look like fireballs or comets moving through the water with their fins streaming behind them. Black butterfly koi are seldom found and the rarest is the doitsu, karasu butterfly. This fish is black, has no scales, and possesses long fins. It looks truly magical in the water, especially when it comes up to the surface of the pond during feeding time.

Black butterflies grow up and become very large because their genes are not as strained as some of the brighter colored fish. And if they have no scales, the body is a glistening jet-black color. The fins keep growing until the fish is broad, and streams like black robes behind it, reminiscent of a jet-black dragon.

Why Are the Fins Long?

So how did the fins of a butterfly koi get so long? It’s a result of an aberration causing the fin length gene to fail in turning off. The gene is a dominant mutation with recessive lethal effects. In fish, the fins are supposed to grow to a genetically specified length, then stop growing.

In the high fin mutation, the fins don’t get the “stop growth” message and they keep on growing. This happens in individual fish of many species from time t time. A few notable examples are Siamese fighting fish, Simpson’s hi fin swordtails, long fin Oscars, and long fin black tetras. Any time the mutation is encountered and identified; it is bred into a species to see if it would make that species more commercially appealing.

Like any other koi, the fins of the butterfly koi are made up of dozens of rays of cartilage that radiate outward and support the fin. These rays generally grow very straight, but past the point of normal length, they can grow wavy. The fish that grow straight rays even into the lengthier parts of the tail are more impressive looking and therefore more valuable. One problem with butterfly koi is that they are often handled the same way as regular koi. Broken fins and tails are par for the course by the time the fish is an adult. So, it’s normal to see bends and waves in the fins and tail of butterfly koi partly because of growing that way, but also due to netting damage as a juvenile.

As an adult, a split tail or fin often does not heal well and remains split. This is irrelevant to the casual observer, the impact of the fish is the same, but you might notice variations in fin quality, and you may care enough to choose one fish over the other based on that observation.

Are They Truly Koi?

It depends on who you ask. Japanese breeders call butterflies “Hirenagagoi” while koi are called “Nishikigoi.” They won’t judge butterflies using traditional criteria because they’re too slender, the ratio of fin-to-body is disproportionate, and they don’t exhibit color patterns in the way traditional koi do.

There are many keepers of traditional koi who find butterfly koi as superior to normal koi. And today, many of Japan’s prestigious breeders breed them today. Butterfly koi are very popular in Europe and North America and you can find them at most fish-retailing locations.

If you haven’t added this fish to your pond yet, this might be the year to do so! You’re sure to enjoy their elegance as they glide through your pond beneath the lily pads.

How to Keep Koi from Eating Your Plants

Why Are My Koi Fighting?

Click Here to sign up and receive your own copy of Aquascape Lifestyles magazine, delivered quarterly to your inbox!