If you want a job go online, apply, show up for the interview, breathe, pass the drug test and you’ll probably get hired as most employers are desperate for workers. As long as you come to work on time and can at least fog a mirror while you are there, you’ll probably and unfortunately even keep it too. You might not make a lot of money or enjoy what you’re doing, but most people have jobs they don’t love. The world still has a few places for workers willing to go through the motions day after day, month after month, year after year…that is at least for now anyway.

However, if you’re looking for a fulfilling career instead of a job, you might want to try the “Howie Roseman Foolproof Approach to Success”

Howie is not only the youngest General Manager in the history of the National Football League, he’s also the head architect of the reining Super Bowl Champion Philadelphia Eagles.

Yet just a few short years ago Howie was all but done in Philly and maybe even the NFL having been pushed aside by an overreaching new Coach in Chip Kelly. He was technically still employed by the Eagles but Kelly called all the shots. Indeed it’s true, no success story comes without it’s valleys. Howie Roseman though looked at his 2015 valley with “Rose Colored” glasses. In typical Howie Roseman style he used that year as a “Gap Year” He traveled the globe and met with everyone from retired NFL GM’s to current GM’s in Baseball and Soccer. He even made friends with some of the top CEO’s of Fortune 500 companies all in his never ending quest of self improvement.

Low and behold by 2016 Kelly was out and Roseman was in control again. He used his new expanded perspective his gap year provided to put together the team that took the Tom Brady lead New England Patriots Dynasty out at the knees two years later to win the whole enchilada!

I’ve never had the privilege of meeting Howie
Roseman but if I did I’d congratulate him first and foremost on his perseverance and work ethic. When most of his high school peers were playing video games he was mailing letters to every NFL Team! Did he quit when he didn’t get any replies? Nope, he just kept mailing them “like clockwork” till he finally landed an unpaid position at age 24 with the Eagles AFTER having earned a Law Degree!

Success is easy…when you set a goal and work your ass off to achieve it and even more so to keep it!

If you aren’t achieving success in whatever you’re doing today try the Howie Roseman approach. I’ll guarantee you two things if you do…

1) You’ll be a lot closer to living whatever success dream you have by “simply” going through the efforts.

2) Your life will be anything but boring! 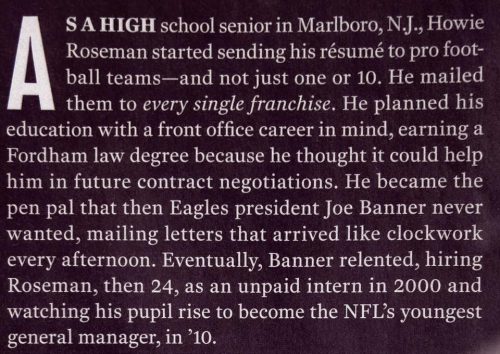